After his father died leaving his mother, sister and him behind, there fathers death though was suspicious and police investigated it . He also left the family a huge debt to some shady people. So now he has to look after them both plus find the people that caused his fathers death, save for college and find a girl for prom.

Reworked phone to drastically reduce CPU usage and make parts translatable.
Reimplemented the pizza delivery minigame.
Optimised for consistent play-speed and smoother frame rates.
Made delivery more consistent; aim Anon’s head at the front door.
Art has also received a touch-up and been re-exported to reduce seams.
Tuned the dynamic background code to be quicker and less memory hungry.
Better support for perennial backgrounds (i.e. those without time variants).
Stat check notifications have been moved out of dialogue to a separate UI element.
Passed stat checks are now also shown, so branches are a bit more visible.
Cutscene transition standardisation continues, with many more updated.
ATM performance has been improved.
The shower rota roulette has been improved to offer more flexibility.
Bug Fixes:

Resolved crash in phone caused by having no active quests.
Enabled Consuela to carry twins, as always intended.
Restored erroneously unused Diane cutscene asset.
Fixed 100s of minor spelling and grammar issues.
Reordered layer to show posing for some Consumr dialogue that was previously obscured.
Removed possibility of taking Consuela to a locked church during her job hunt.
Renamed the regular beaver plushie to be an otter to match its depiction.
Corrected some of the flower names in Cupid.
Updated some dialogue where the player’s chosen name for Debbie or Jenny was not being respected.
Switched to using the correct background during Debbie’s day zero phone call.
Fixed player name alignment on report card.
Improved sleep prompt during Mia’s call for help quest.
Remedied the time of day in which Grace & Odette’s date takes place.
Fixed issue with daylight background being used at night during Jenny sex visits.
Taught Micoe to give accurate information about the location of Pregnax, Priya and the lab.
De-duplicated Jenny when she’d appear in the recovery room and at home after giving birth.
Prevented a segment of Eve’s dialogue triggering prematurely on weekends.
Given Debbie the ability to correctly identify a baby’s gender.
Fixed Anon’s internal virginity tracking so he can be honest in the game with Eve.
Updated a few instances where an incorrect blur was being used in the background.
Removed some disused/superseded assets.
Added some rails to Jenny’s ElectroClit quest to help avoid blocking other quests making use of Pink.
Fixed visual oddity occurring on entering the school for the first time.
Restricted access to Debbie’s panties while she’s in the room to prevent a conflict.
Resolved multiple blocking quest conflicts with Jenny mentoring Roxxy.
Removed an unneeded Bissette quest prompt that would play at the wrong time and without any background.
Fixed multiple visual and gameplay issues in Roxxy’s first study quest.
Prevented being able to jump start Diane’s breeding partner quest the night before.
Added confirm step to stat resets in order to give a second chance to people that don’t understand.
Improved school sneak quest rails to prevent accidental triggering of other quests.
Revisited pregnancy updates such that they play in sequence instead of only the first.
Fixed Annie’s button at her house to use correct dialogue.
Limited Richard and Lucy’s dialogue prior to taking delivery of Diane’s milk for continuity purposes.
Guarded against soft-lock when fooling around with Debbie instead of completing Diane’s route.
Prevented the search dialogue prompt in Jenny’s room playing if she is present.
Repositioned a Diane button that was trying to escape through the ceiling.
Removed a redundant dialogue option from Ivy’s button menu.
Restricted Lucy’s dialogue options about kids to when she’s in the daycare.
Removed the pregnancy minigame once insemination has already occurred. 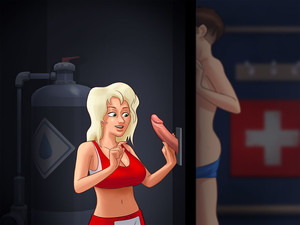