In this story you try on the role of a young man who returned to the city of Summerville for a summer vacation after years of absence.
Adult life offers many benefits and opportunities, as you will soon see.
What you will do this summer – whether you will explore the city and its surroundings, or try to seduce one of the beautiful residents of the city (or maybe all of them) – it all depends on you.
Your adventure begins here.​

– Added new events to Destiny’s storyline
– New place: Destiny’s apartment (Downtown)
– Added a new night scene with Miranda
– Added a new collectible card
– Improved dialogue in the last scene with Miranda and also taken into account the scenario in which the player decides not to peep on her
– Made improvements to the character attribute system. “Base chance of winning a fight” is now called “Fighting Skills”. Added new attribute: “Eloquence”. Attribute values are set at the beginning of the game to 3/10 and the player has the opportunity to increase them in different ways during the game. Players using a save file from previous versions of the game can manually set attribute values to the default using the mirror in your room. Attribute values affect the success rate of a player’s actions in some situations.
– Added a new way to increase the level of Fighting Skills
– Added a new way to increase the level of Eloquence
– Added Secret Gallery as a bonus for $5+ Patrons
– Added new items that the player can buy from Sparrow at the pawnshop: City Map (on which all the places you know are marked) and Camera (that allows the player to capture various memorable moments). Also added the ability to sell her valuables that you find.
– Retouched Destiny’s model to make her look more natural in new renders
– Fixed the bug that kept some of the cards in the inventory after you put them in the album
– Worked on reducing noise in existing nighttime pictures
– Bunch of various minor improvements 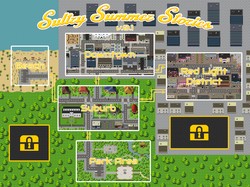