What could be better than the good old adventures of a brave hunter in the harsh world of the middle ages?
Of course, adventures in the world of magic! Terrible monsters, evil sorcerers, cruel lords, mean mercenaries - this is only a small part of what our main character will face, who went in search of his sister.
Changelog:
New Quest: The Forest Guest. In this quest, you’ll learn how the elf came to be in the tavern.
New Quest: Astral Essence. This quest is the sequel to “The Forest Guest.”
New Quest: Nature’s Wrath. You can get this quest by reading the flyers on the quest board and then speaking with the arms trader.
New Quest: Stronger Than Steel. The fisherman will give you this quest.
New Adult Scene with the brunette nun. Drop by her cell one night when she’s sleeping naked on the bed.
New Adult Scene with the elf.
New Mechanic: The fishing mini-game. You’ll need a fishing rod to play.
New Mechanic: A “try-to-catch” mini-game. It’s involved in “The Forest Guest.”
Added a new outfit for the elf.
Added a new character: The Fisherman.
Improved the red-haired nun’s outfit.
New Location: The tavern’s second floor.
New Location: The fisherman’s house.
New Location: The dock (near the fisherman’s house)
Added short descriptions of the “upcoming action” icons that appear above enemies’ heads in the combat system.
Items dropped by enemies can now be sold for around 50% more gold. It’s now easier to farm gold by selling those drops.
A “rollback” function is now available! You can scroll back through past dialogs via the mouse wheel (for mobile users, a “back” button has been added at the bottom of the dialogue box).
Sleeping now restores 10 HP per 6 hours slept.
Added items that can grant +attack, +defense, and +skill bonuses.
A powerful sword is now available through cheats that can destroy any enemy in a single strike.
Fixed a critical bug that was preventing plot progression in Quest 8.
Fixed many other bugs and probably added some new ones.
And much more! 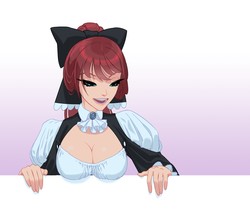 One Hell of a Week – Demo Version